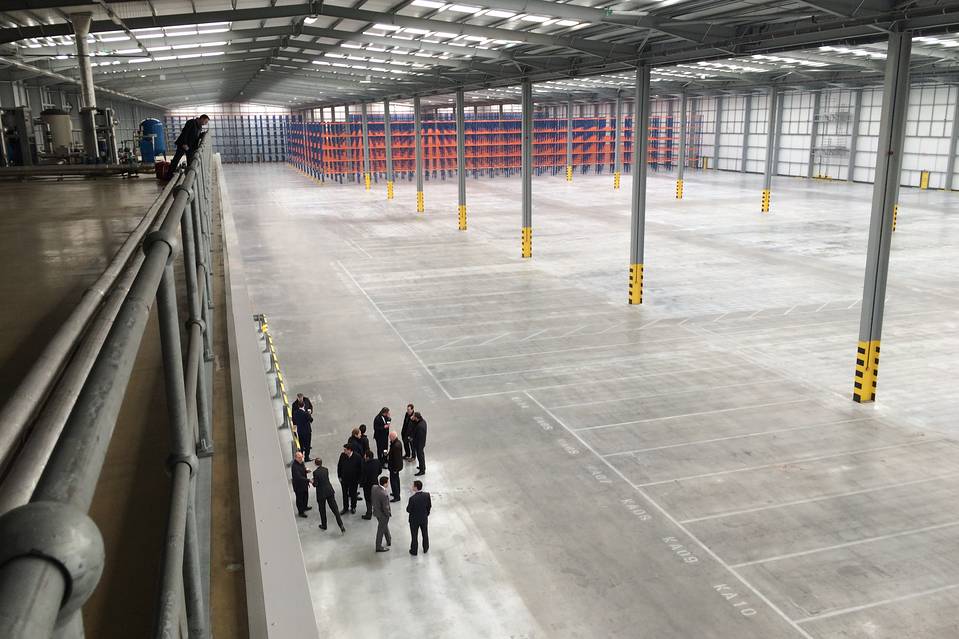 On a weekday morning in suburban east London, a group of real-estate agents tucked into pork pies and sipped sloe gin during a sales tour of a recently vacated warehouse the size of four football fields. They all agreed it wouldn't remain empty for long. Industrial warehouses are becoming vital to retailers across Europe as their business models shift to serve the burgeoning number of online consumers expecting next-day delivery of their goods. Real-estate investors?hungry for the meatier returns often available in less-trodden corners of the market?have noticed. Last year investors piled £24.9 billion ($26.8 billion) into European industrial properties, up from £19.3 billion in 2013, but still below the pre-financial-crisis peak, according to data firm Real Capital Analytics. Logistics properties are expected to be the best-performing real-estate sector in Europe over the next five years, a recent report from Deutsche Asset & Wealth management said. "Industrial is a relatively young asset class for investment in Europe compared to the U.S.," which has seen an influx of investors into the sector in the past few years, said Philip Dunne, president for Europe at San Francisco-based industrial real-estate firm Prologis Inc., which bought £915 million of properties in Europe last year. "Now it's becoming more institutional." Investment returns are one big draw of warehouses. European industrial properties had an average capitalization rate, which measures income as a percentage of invested capital, of 7.3% in 2014, compared with 6.2% for retail space, Real Capital Analytics data show. North American investors have led the drive into Europe. P3 Logistics Parks acquired in 2013 by private-equity firm TPG Capital and Ivanhoé Cambridge, the real-estate arm of Quebec's state pension fund, doubled the size of its business in 2014 with about £1 billion in acquisitions. LogiCor, an arm of Blackstone Group LP formed in 2012 to buy European logistics assets, scooped up more than £2 billion of properties last year, more than doubling the size of its portfolio while expanding into six new markets, including Germany, Spain and Italy. LogiCor owns the Dagenham warehouse, which it is seeking to rent out. Blackstone, the world?s biggest real-estate investor, embarked on a similar push in the U.S. in 2010 with its IndCor Properties business. It sold IndCor to GIC Pte. Ltd., Singapore's sovereign-wealth fund, for $8.1 billion in December. Eventually, Blackstone will sell the LogiCor business, either through a stock listing or a private sale, said Mo Barzegar, chief executive at LogiCor. "In the meantime," he said, "we'll keep building the platform." Shiny glass offices and bustling shopping malls have historically grabbed the attention of property investors. Offices in Europe saw $94.6 billion of deals completed last year, while $46.1 billion in retail assets were sold, according to Chicago-based commercial real-estate broker JLL. But retailers, grocers and delivery companies "increasingly need high-quality logistics space to fulfill orders," said Hemant Kotak, senior analyst at Green Street Advisors, a real-estate research firm based in Newport Beach, Calif. "There are opportunities here." There are also risks. Older warehouses "were often just a box," Mr. Kotak said. While some warehouses can be fitted out with high-tech automation in desirable locations, others are being left behind, he said. For landlords, the question is whether you'll be able to relet these, more basic warehouses when the lease is up. Out in LogiCor's Dagenham warehouse, called Logic233, the previous tenant had a contract for distributing Coca-Cola Co. products in London, said Mike Best, U.K. asset manager at LogiCor. When the tenant moved out, he said, the firm spent about £500,000 ($741,000) refurbishing the space, "mostly just cleaning and basic repairs." LogiCor is planning to lease it for about £1.7 million a year, he said. Global delivery companies, U.K. food retailers and U.S. e-commerce companies are the types of firms that could potentially sign the next lease, said Dominic Whitfield, director at broker Savills, which LogiCor hired to rent out the facility. Other agents present were scoping out Logic233 on behalf of clients. They liked the proximity to central London, which saves fuel costs, and the size, which at 233,000 square feet is larger than other warehouses in the area. "There's not enough product around here" said Peter Higgins, divisional partner at property consultant Glenny LLP. "Hardly any stock was built during the recession. And any that was built was small. People are looking, but there's nowhere to go." A lack of warehouses near major cities, with their millions of consumers, is evident throughout Europe, the Deutsche report said, adding, "Much of the available space is either in secondary locations or not up to the required standard of current occupiers." Analysts said this will need to be addressed to suit the changing needs of retailers. 'E-commerce is a new demand driver. It's very, very important," said Mr. Dunne at Prologis.