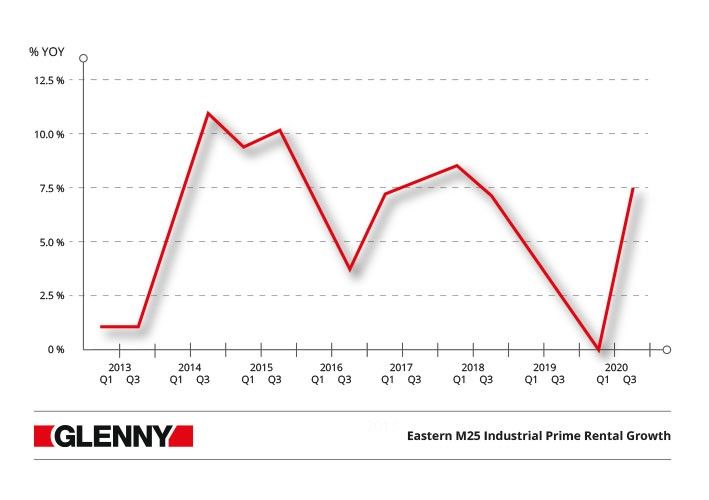 Prime industrial rents in the Eastern M25 industrial market bounced back in Q3 2020, growing by 7.4% across the region as a whole, with some locations registering double digit growth. The return to growth followed a period of stagnation, with the election, Brexit and the pandemic impacting on business confidence.

John Bell, Head of Business Space at the Eastern M25 specialist, Glenny said, “We’ve come through a difficult 12-15 months, but the market in our area has proven to be remarkably resilient. Demand has remained robust and whilst availability has edged up, this has provided opportunities for occupiers looking to expand or upgrade their space.”

Take up in the Eastern M25 market has been robust with 5.4m sq ft of activity recorded in the first three quarters of the year. The ‘Big Box’ market has been particularly strong, with nine deals totalling 3.6m sq ft completing up to the end of Q3 and two further deals signing in the weeks following the quarter end. This is a record for the Eastern M25 market and shows how the market has flourished through adversity.

Bell adds, “It’s been a remarkable year so far and, looking back, certainly better than we expected when ‘lockdown’ began. Demand for industrial space across the region hit a peak of 21m sq ft in Q3 2020, a third higher than the previous peak level recorded in Q3 2018. This has certainly impacted on rents, which rebounded with strong effect in Q3. Nine of the 16 locations we survey on a regular basis saw prime values move ahead in the three months to the end of September, with the East London market showing the strongest growth, as rents increased by 19.3% on average.”

Unlike the industrial sector, the office sector across the Eastern M25 has experienced a difficult period, with take up across the region down to 752,000 sq ft, almost 66% below the trend level of activity for the Eastern M25 market.  Prime rents have fallen back by 1.6% on average over the past three months, with six locations in the Glenny Rent Survey registering falls in values but the majority of locations remaining stable.